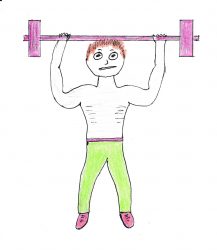 Use Your Body (Language) for Effect

Body language has a significant part to play in public speaking. Compared with communicating by email or phone, being in the same room adds another dimension. It is like the difference between radio and television.

Although non-verbal communication, aka body language, plays its part in conversational speaking, it’s even more important if you are speaking to a roomful of people. Therefore, effective communication needs body language to aid the message, not hinder it.

Want to know how it works?

Body language can have a considerable bearing on how the audience feels about you. It impacts on the effectiveness of what you have to say. And it will reinforce the message or distract from it. If you use it well it’s a key component in making persuasive presentations.

Let’s look at how our body speaks.

Standing with feet slightly apart is a good default position to adopt. It gives stability and helps to stop involuntary swaying. A steady stance conveys an air of confidence and authority.

Some speakers have a shy leg: it tries to hide behind the other leg! This means that they are supporting most of their weight on one leg. It looks odd and isn’t good for stability.

Some presenters prowl around while speaking. This is often the result of nerves, although some think it adds dynamism to their performance. The reality is that it can become distracting very quickly. Movement should be for a purpose only. For example, if comparing two aspects of something, just moving a couple of feet to one side while saying, “On the other hand …” can help to reinforce the contrast.

Your upper limbs are very useful for making meaningful gestures when presenting. After all, no fishing trip would be complete without us catching a fish this big! 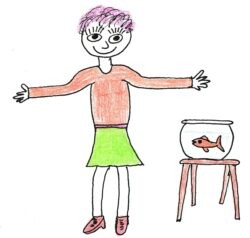 However, the problem is that many speakers are unable to speak without waving their arms around. This may be OK if talking about windmills, but otherwise it becomes distracting very quickly and so should be avoided.

If you have the use of a lectern, hands can be rested lightly on it to give them something to do. Rested lightly, not gripped tightly with white knuckles. An alternative, is to rest one hand in the upturned palm of the other, with slightly bent arms. This is sometimes known as the cup and saucer approach.

Hands in pockets is a no, no. It just looks wrong and can appear disrespectful to the audience.

In their attempt to avoid windmill status, some speakers stand with their arms held stiffly at their side. The problem is that it looks wooden and unenthusiastic. Some degree of animation is required.

The look on your face can convey additional meaning to the words. But this is something that is difficult to plan for. The best solution is to speak in a manner appropriate to what you are saying. For example, if you speak excitedly or in a serious tone, your face will tend to adopt appropriate expressions.

What you can control is your smile. When you stand up to speak, take time to settle. Look around at the audience and smile. It will start to form a connection with them. And it will also reassure them that you are confident about speaking to them, which is quite important.

Most audience members would be nervous if asked to speak in public, and so they may be concerned that the speaker will mess up, which would be awkward for everyone. That could mean they aren’t fully focussed on what you are saying. Smiling at them will relax them and prepare them to listen to what you have to say.

Taking time to settle also provides the opportunity to take a deep breath. This is particularly important if you’re nervous, as it will help you to relax a little. It also allows time for you to organise your speaking notes.

Eyes are the part of your face that deserve their own heading because the way you use them can have enormous impact.

“There was something about her eyes that went beyond radiance. They locked onto you and were utterly mesmeric.”  So said Alastair Campbell, Tony Blair’s communications director, when he and Blair, first met Princess Diana.

Few of us can hope to have the effect that Diana had on people. But we can still use our eyes to influence the audience.

Aim to look briefly at every person from time to time. Not just look in their general direction but look at their eyes. But only briefly. More than a second and they may start to feel uncomfortable. Try to look at all parts of the audience equally, but on a random basis rather than appearing to sweep around like the beam from a lighthouse.

As the audience gets bigger, eye contact becomes more difficult to achieve. Nevertheless, you should still strive to make everyone feel that you’re speaking to them directly. It’s easy to fall into the trap of looking at the front couple of rows. A conscious effort is required to look at all parts of the room equally, including the back row.

Speakers who read from their notes, study the floor, ceiling or back wall of the room are unlikely to have an impact on the listeners. Eye contact is crucial and requires practising. Read more about speaking with your eyes.

By looking at the audience you’re able to get a feel for how receptive they are to what you’re saying. Their body language will tell you if they are reacting positively. Or yawning!

A cautionary word though. There will always be one or two people who give the impression they don’t like what they are hearing. They’ll appear emotionless, or even frowning. Don’t worry, they are probably just concentrating very hard on what you’re saying.

Equally, there will be a few who are smiling at you or nodding in agreement. Avoid the temptation of just looking at them.

Remember, how you use your Body Language in Public Speaking is an important part of delivering the message. It’s good to adopt a steady stance rather than to wander around or standing with one leg behind the other. If you adopt a stable position and stand upright, it will also help with your voice projection.

Hands should be fairly still unless being used to make a relevant gesture. Smiling is good, and most importantly, you should maintain eye contact with the audience. You want them to feel you are speaking directly to them. To feel that this is about them, not you.

Are you ready to speak Body Language?

Not exactly body language, but it’s worth rehearsing while wearing the clothes you’ll be in when delivering the presentation. Check to see that those big gestures can be made without causing any sort of a clothing malfunction.

And before standing to speak, make sure that everything that needs to be done up or hitched up has been adjusted!