Speaking With A Script 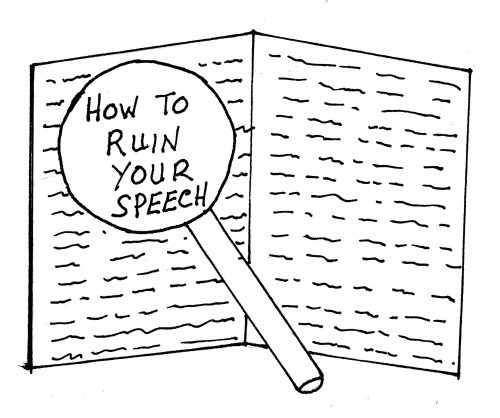 Warning! Speaking from a script may seriously damage your speech.

Only speak from a full script if you are required to do so.

Otherwise, use speech notes or, even, no notes at all.

Why Have A Full Speech Script?

Most of us will never need to deliver a fully scripted speech. But if you are in a role where your speeches are released to the press in advance of delivering them, you will need a full script. And you’ll have to stick to it.

The other possibility is that you work in a large organisation and different members of management have to deliver the same speech to different parts of the organisation.

In either case, the problem is that the speech is most likely to have been written by someone else. You’ll be delivering their words but you’ll need to make them sound like yours if you want to be convincing.

But isn’t speaking from a script easier?

Surely speaking from a script is easier than having just a few notes isn’t it?

Speaking with a full script allows you to just stand up and read the words.

If you want to sound boring and just read from notes, this is the way to go. You can stare at the script rather than the audience. In fact, you don’t really need an audience, why not just bore yourself and save them the pain?

You don’t even need to know what you’re talking about, so this is a great way to deliver a speech if you know nothing about the subject. And want to be totally unconvincing.

Perhaps the picture portrayed is a little over the top. But if you’ve listened to lots of speeches or presentations, you’ve probably encountered the speaker who reads from their notes and makes little attempt to connect with the audience.

Worse, you’ve endured a PowerPoint presentation where the speaker has the script on slides and turns their back on you to read them.

You and everyone in the audience reaches the bottom of the page before the presenter gets half-way. And then your attention drifts elsewhere.

So the obvious advice is don’t put words on slides and don’t speak with a script.

However, if you have no choice but to read from a script, here’s some guidance on how to do it well.

A good start is to know the subject. Or at least to understand sufficient about it to feel comfortable with speaking about it, albeit with the help of a script.

Have you read to young children? When you read them a story you probably try to vary your voice to represent different characters. It helps to bring the story to life.

Whether a children’s book or something a little more grown up, try reading a section out loud. Then read it again, this time adding emphasis where appropriate.

Try slowing down for the serious bits and speeding up for any exciting elements. Briefly pause at the end of sentences. Include longer pauses between paragraphs.

You’ll probably mess up and get the emphasis in the wrong places, mis-read words or even lose your place. The latter problem is less likely to occur in books designed for younger children as they tend to have less text and a larger font.

Less text and larger fonts – does that give you a clue about speech scripts and notes?

That’s story-time over. Now for the speech script.

Read the script a couple of times to familiarise with it.

Then try reading it out loud. As with the book, or any other speech, you need to use voice variation to add interest and emphasis. To be convincing, it needs to sound as though it’s your speech, rather than just something you are reading.

Hopefully, you’ll be able to access the script to adjust it to suit your delivery. If abbreviations have been used, you may be more comfortable with the full word when reading.

And it helps if you can leave spaces where you want to pause.

Maybe change the size of the font or use bold to highlight voice changes. Say this louder. Or space  out   words   to   indicate  a    slower    section.

A large font and well-spaced lines make it easier to scan the text, more or less in your peripheral vision.

That way you’ll be able to maximise eye contact with the audience. And then they may well not realise that you have a script.

And longwinded, complex sentences with grandiloquent wording can be exceedingly difficult to scan and to read when compared with simpler, shorter ones can’t they?

See what we mean?

If you can’t edit the layout, you can always highlight sections with a marker pen.

Hopefully you’ll have had enough time to really rehearse the speech. Ideally you would start a week or more in advance and practice delivering it several times a day until you almost know it by heart.

The time has come to deliver the speech.

Try to find time to read through it one more time before going on stage.

Take your time and don’t forget the pauses. Look at the audience as much as you can. Eye contact is particularly important when delivering key points in the speech. It emphasises that you are speaking directly to the audience.

You want the audience to believe it’s you speaking, not a scriptwriter.

Speaking With A Script – A Final Note

If you will be speaking with the aid of an autocue or teleprompter, you still need to practise as much as possible, so get hold of a paper copy of the speech for rehearsal. And make sure to have at least one run through using the technology.

But hopefully you are not required to speak from a script and have read our blog posts on speech notes or speaking with no notes.