How to build public speaking confidence 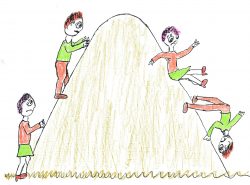 That day when Jack and Jill climbed personal mountains to overcome their nerves and deliver their first presentations was quite a few years ago. Back then they both worked for a large company and they didn’t know each other before attending that meeting.

It was quite by coincidence that they were both speaking to a large audience for the first time.

Actually, there wasn’t a huge number at the meeting, it just seemed like it to our nervous presenters as they surveyed all those faces looking at them when they stood to speak.

Over time they met often at work and got to know each other quite well.

But then their careers and their lives went in different directions.

Some years later when they bumped into each other again at a business event, neither recognised the other immediately. But then memories started to stir and they decided to stay on after the event to catch up over a coffee.

Coffee and Confidence (Lack of)

How their lives had changed. Jill was now running her own business with a dozen or more employees. And Jack was enjoying life as a self-employed business consultant.

As they sipped their coffees and chatted, memories of those first presentations came flooding back. Neither could remember much detail of what they said and even less of what the other had said. Or, in fact anything about the meeting. But they could still visualise all those faces looking at them when they stood up to present.

They still recalled how shaky they thought their voices sounded and how they trembled while speaking. And that they were still shaking minutes after having sat down again.

Despite her lack of confidence in herself when she was called upon to present, others saw a capable speaker who knew her subject. Someone who prepared well. Her boss had confidence in Jill; he could rely on her. And he told her so.

Then, one day the sales manager asked Jill if she would do a presentation for a group of potential customers. He confided in her that he really should ask her boss to do it but she was a better presenter. Oh, and could she help him to devise an excuse for not inviting her boss.

Now, as you can imagine, this was a big confidence booster for Jill.

A Little While Later – A Confidence Boost

Not long afterwards, Jill saw her boss speak at an event. And she realised that he was far less confident than when he was in the comfort of his office. He didn’t look at the audience. Instead, he studied the floor or turned his back on the audience to look at his slide presentation. He mumbled his words while the audience surreptitiously glanced at their watches, one or two even tapping them to make sure they were still ticking.

Although Jill liked her boss, she almost enjoyed his discomfort because it brought it home to her that the sales manager was right. She was a better speaker than her boss. Wow!

Over the next year or two Jill did quite a lot of presentations in meetings and at events. She started to enjoy public speaking even though the butterflies never quite disappeared.

Looking back, she realised that she’d been asked to give those presentations because she knew her subject, was reliable and was a reasonably good presenter. Of course, with the experience she had now, she recognised that she still had a lot to learn in those days.

And then Jill took time out to have children. By the time she returned to work, the company had been restructured and her old department had disappeared. Jill was offered a different job in an area of the business that she wasn’t too familiar with.

She had to start climbing that hill again because her confidence had disappeared along with her old job. And she was a few years older now, so starting from scratch seemed more challenging.

Jill’s previous boss had left the company but Tony, the sales manager, was still there. In fact, he was now Sales and Marketing Director.

Up the Confidence Hill again

One day her new boss called Jill into his office. He was due to go to a meeting with Tony and some of the other directors but he was double booked. Would she go along instead and present an update on the project she’d been working on.

Jill went to the meeting and was about to start her presentation when Tony stopped her. He thanked her for the work she was doing on the project and how she had involved key members of his team.

And then another director piped up and offered his thanks for the hard work she’d put in on a very challenging project.

With those ringing endorsements she sailed through her presentation without any awkward questions being asked or anyone arguing against the route she was taking.

Jill came out of the meeting in a bit of a daze. She’d never experienced comments like that before. And she didn’t recall having seen anyone else praised in such a way.

The years went by and Jill’s career progressed steadily. Her confidence grew but she was still reluctant to push for promotions.

And then one day

One day when she realised she was frustrated working for a large organisation. By now she felt that she had the experience and confidence to start her own business.

And so she handed in her notice and started up on her own. But that’s a story for another day.

Hearing Jill describe how various points in her career had boosted her confidence caused Jack to think back over the years. He’d worked for a couple of different companies and had gained wide experience. He’d chaired many meetings and given lots of presentations and even made the occasional speech at events. Ultimately he’d risen to a moderately senior level.

There was the time he’d been invited to attend a meeting and found just six other people there. It was about a very important project but it had to be kept secret. Even his bosses didn’t know about it. Why had he been selected? Well, he knew quite a lot about the subject and clearly he was trusted.

Then there was the occasion when the managing director wanted a report on how a competitor had turned round their performance. Jack was asked to research it and present the report.

And when there were difficulties and tension between the engineering department and a hi-tech supplier, Jack was asked to get involved. In effect to act as a mediator and to chair meetings between the two parties and to smooth out their working relationship.

The more he thought, the more he realised how many times he’d received metaphorical pats on the back. Being asked to get involved with these varied activities amounted to someone on high saying, “Well done Jack”.

Of course, at the time most of them didn’t register with him. With the benefit of hindsight, he could have taken onboard those votes of confidence in him and, perhaps, he could have been a different Jack.

Do Be Quiet – Not Good Speaker Training

The trouble was that Jack came from a modest background where few aspired to high office. And like many young children, sometimes he was told to be quiet when adults were trying to speak. So it was hardly surprising that he wasn’t filled with confidence when he entered that room of grown-ups to give his first presentation.

Perhaps it was why he hadn’t pursued promotion as enthusiastically as he might have done. After all, it would have involved mixing more with those grown-ups, the ones who had their own office and seemed a bit scary. Actually, some of them really were quite scary.

It was only in later years that Jack realised that now some of the younger employees were nervous when meeting him or attending meetings he ran. They were where he’d been all those years ago.

By now Jack was getting restless. He didn’t want to spend the rest of his working life doing the same things he’d done for years. And so, during a reorganisation, he took the opportunity to leave.

Jack had realised that he’d gained a great deal of business experience over the years and thought he could use it to help businesses improve the way they operated. He started attending networking meetings and gradually work as a consultant began to come in.

And it was at one such meeting that he’d met Jill again after so many years.

Building Confidence – If Only

As they chatted, Jack and Jill realised how far they’d come since that first time in the limelight for them both. They reflected on how much more confident they were now. That’s not to say they didn’t still have the odd butterfly when they got up to speak, but it was no longer a great fear.

They also pondered where their careers might have gone if they’d had today’s experience and confidence when they were younger. If only they had fully realised how many times there had been a vote of confidence in their abilities. Where the words or actions of colleagues and managers had underlined their worth. But the problem is that in a busy life, these small endorsements tend to be forgotten or even overlooked in the first place. The significance of them not fully recognised.

Now, if they had kept diaries in which, at the end of each day or week, they’d noted anything positive that had happened, however small. And from time to time they’d read through it to remind themselves. Wouldn’t this have boosted their self-worth? Might it have led to greater things. Even a more enjoyable life.

About Jack and Jill

We’d like to thank Jack and Jill for sharing their stories. They are complex characters. Each is a little bit of lots of people, some real and some imagined. But isn’t that how most of us are?

Are you a nervous speaker? Maybe terrified even? Why not read our article on how to overcome your fear of public speaking?

If you have to deliver a speech or presentation on a particular subject, could you use storytelling to bring it to life?

Subscribe to our fortnightly newsletter to receive blog updates.