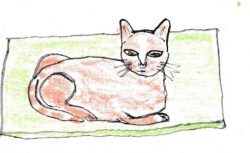 Barriers to communication are the last thing you want if you are going to give a speech or make a presentation.

Anything that puts a barrier between you and your audience is bad news.

However, there’s a lot of nonsense talked about so-called barriers to communication.

But, before we go any further, we need to acknowledge that there are barriers to effective verbal communication.

A downbeat voice, not engaging with the audience and not appearing to be sincere in what you say, will prevent you from being an effective and persuasive presenter.

You’ve probably heard the oft-quoted ‘fact’ that studies show the actual words we use account for just 7% of the impact of the message. Then the way we use our voice contributes 38%, with a whopping 55% being down to our body language.

Let’s examine those numbers. We’ll start by having a chat about a cat sitting on a mat and what we can learn from it.

The cat sat on the mat?

Emphasis on ‘the’ makes us realise that it isn’t any old cat.

Not the dog on the mat then.

Not standing or lying down.

Definitely the mat, not the armchair.

Who’d have thought that a six-word sentence could have so many subtly different meanings?

Clearly the cat and the mat support the view that the actual words we use account for just 7% of the impact of the message.

Hang on a minute. We could discuss the cat and the mat over the phone and it would still work, wouldn’t it? So where does body language come into it?

Ah, well … erm … that’s not public speaking is it?

OK, so I’m giving a speech at night. And there’s a power cut. The lights go out.

Not much body language visible then, is there? But if I chose to keep on speaking in the dark I could still convey the message about the cat couldn’t I?

It’s quite clear that the 7%, 38%, 55% ‘fact’ is complete nonsense, regardless of how often you hear it quoted or read about it.

So how did this piece of fiction arise?

As Professor Max Atkinson points out in his book, ‘Lend Me Your Ears’, if 93% of communication is non-verbal, we wouldn’t need to learn foreign languages, would we?

We’d be able to get by just by pointing at things on shop shelves or on menus (if we could understand them), but it wouldn’t work in conversation, let alone a presentation.

Professor Atkinson identifies that the research on which the figures are based was carried out by Dr Albert Mehrabian, a social psychologist.

The only snag is that the research wasn’t about communication in all its forms.

And Dr Mehrabian cautioned against taking the numbers as gospel, even in their intended context. More research was required.

But the media got hold of the story and ignored the subtleties, and so a myth was born. One that has been quoted many times. 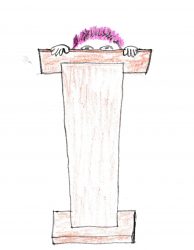 You may have heard that desks are a barrier to communication.

Doesn’t really make much sense does it?

Words can travel past the desk. And, unless it’s huge, we can see over it.

Nevertheless when we have a meeting we come out from behind the desk and sit in armchairs. Well, we do if we have a big posh office.

But where do we put our coffee? And what do we lean on when making notes?

Surely it’s the attitude of the meeting host that is more relevant than the furniture?

A bit like desks, lecterns are sometimes cited as a barrier to communication in public speaking. Well, yes, possibly, if they are solid and so high that the audience can’t see the speaker properly.

But most lecterns aren’t like that, so it isn’t an issue.

What’s more of a problem is a speaker who believes the myth and comes out from behind the lectern and then constantly bobs back to read their notes.

It can be far more distracting and becomes a barrier because of that.

Arms folded across the chest is claimed to be a barrier. And yet it is the pose that many of us adopt when chatting informally, because it gives us something to do with our hands and arms.

It’s a perfectly natural thing to do. So how can it be a barrier to us communicating effectively?

It’s only if the speaker takes an aggressive stance, chest pushed out and arms crossed purposefully that it makes it clear that they’re in no mood for a friendly discussion.

Perhaps that’s most likely to happen during a presentation when audience members start asking difficult questions.

Easier said than done, but it helps if you can remain open to questions, even where you don’t have an easy answer.

A presenter who stands perfectly still with their arms rigidly held at their side may find it quite difficult to convey much enthusiasm for their subject.

On the other hand, someone who paces around the whole time is likely to distract us from absorbing their message. Likewise, a speaker who constantly waves their arms around for no purpose can become irritating.

Sometimes there can be a fine balance between animation and distraction.

The truth is that there aren’t too many, if any, hard facts about what is the right or wrong way to deliver a talk or presentation.

You certainly shouldn’t believe the myth that our words account for just 7% of our communication success.

In some contexts, the precise wording is important. But most of the time it doesn’t matter too much if you use slightly different words.

What does matter is the enthusiasm you bring to your subject and the way you convey the message. So long as your enthusiasm doesn’t lead you to too much arm waving or marching around at the front of the room, you’ll be fine.

And if you have the use of a lectern for your notes, or a table for your slide projector, just be grateful and take full advantage of them.